WHIRLED MAKES THE MUSIC GO ROUND 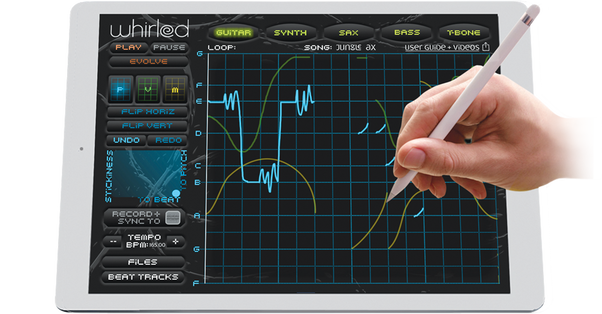 For digital music makers who can't play an instrument and are tired of controller keyboards’ mechanical notes and fudging with their pitch and mod wheels. With just their index finger and imagination anyone can draw paths to define notes that are beyond the abilities of even the most talented musicians. Draw horizontal lines to define standard 'flat' notes, but also curves/squiggles to define previously impossibly intricate pitch, volume and modulation transitions.

Our 5-year goal: To be the go-to for anyone who wants to make music but can’t play an instrument.
SAMPLE ELEC GUITAR, BASS & SYNTH GROOVES DRAWN IN WHIRLED:
WINNER IN 2019:
Hi5 Pitch Competition
Canadian Music Week Pitch Competition​
“A unique and inspiring way to work with notes.”
- Tim Webb, editor of Discchord

“This is how kids are going to be making music ….”
- Lucie Lalumiere, President & CEO, Interactive Ontario

“Hello, I love the app, I'm a producer from Budapest, Hungary. I've used your sexy sax on our new album, and now Hungarian radios begin to play the song with the sax solo in it. thanks”
- Titusz, producer for Euro pop band CarbonFools

“ ... Very usable and unusual results ... Cool/exotic things you can do with pitch.”
- Stub, prototype tester

“I've been having a blast with this ... Implement this into some of your more serious projects ... This thing is pretty wild.”
- Annalog, prototype tester
​